What is Oil Painting Medium?

What is Oil Painting Medium?

The oil painting medium is renowned for its beautiful and vivid qualities.

The level of depth that they are able to achieve can add a fascinating dynamic to a painting and send you on a spiritual journey.

Did you know that the Mona Lisa is an oil painting? Painted over 500 years ago, she's one of the most famous paintings in the world which attracts over 6 million visitors.

Although their slow drying time can be considered a negative, one positive is that the artist can spend even longer on the artwork as opposed to other mediums.

Another aspect which makes oil painting quite exciting is the level of flexibility that can be used in its creation.

How oil paint is created is down to personal preference. However, the essential ingredients are mixing dry powder pigments with a certain oil.

Examples of these oils are Linseed, Stand, Poppyseed, Walnut and Boiled Oil.

What's remarkable is that each of these oils have their own effect on the outcome of the painting.

For example, Linseed oil can add gloss and transparency whereas stand oil can be used for glazing and also doesn't reveal any brush marks!

Now that you know how it's made, where did this practice come from?

Tracing the exact origin of oil painting is difficult with conclusions as much as 10 centuries apart!

It's said that oil painting dates back to the 14th and 15th century. However, there is evidence of it being used in 5th century A.D - in the Bamian village of Afghanistan where Chinese and Indian painters created art in caves.

Despite all of this, oil painting became widespread in Europe during the 15th century where artists like Jan van Eyck made use of the medium to create 'Arnolfini Wedding Portrait'. Attracting critical acclaim, it influenced even more artists.

Over time, the oil painting medium has created some of the most celebrated artworks ever.

Here's are 5 famous oil paintings which tell their own story and are revered around the world.

One of the most talked about paintings in the world, the Mona Lisa resides in the Louvre Museum where it's said she receives love letters from admirers!

Created by the Leonardo Da Vinci during the High Renaissance period, it's her expression which has caused arguments for centuries. Is she smiling? Frowning? Happy? Sad? Hungry? Where are her eyebrows?

As she continues to be a top attraction at the Louvre, we can only wonder what she was thinking at the time of the painting.

Did you know the Mona Lisa was stolen before? In addition, the artwork was valued in the '70s. Check out our article: How much is the Mona Lisa worth? 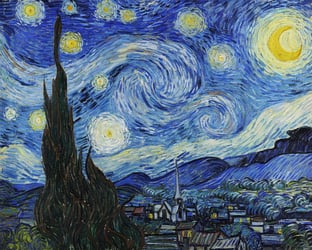 Vincent Van Gogh was a troubled but extremely brilliant dutch painter who has created an array of famous works.

Starry Night is considered one of his most successful and was completed in June 1889.

The painting shows the view from his room in his Saint-Rémy-de-Provence asylum room. Unaware to Van Gogh, it's said that one of the stars that he painted was Venus!

Residing in the Museum of Modern Art in New York, it's one of the most recognised paintings in the world.

Painted by James McNeil Whistler in 1871.

The painting's subject was his mother but there are conflicting stories about the intended subject.

It's said that a model, friend and neighbour was the original intention and that they were to be painted standing. However, the subject ended up being his mother but she chose to sit instead.

Despite these arguments, the painting itself is a powerful piece. Capturing a wave of emotions, it's been the subject of intrigue that's led to this painting being credited as Whistler's most famous work!

The painting is owned by the Musée D'Orsay located in Paris but, as of 18th September 2019, it's on loan at the Louvre Abu Dhabi. 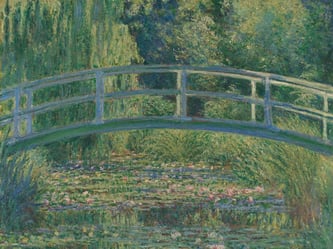 Image Via - The National Gallery, London

Claude Monet painted this piece as part of a series which is said to contain around 250 artworks!

Beautifully capturing a water lily pond underneath a bridge, Monet has brought nature to life in a wonderful way.

The vivid nature of oil painting has achieved a fantastic hue of green which gives you the impression of how much life was captured by the artist.

A visually stunning artwork, it's a fine example of how the oil painting medium can dramatically bring something to life.

Théodore Géricault was the artist behind this controversial piece. Completed when the artist was just 27, it's become a standout from the Romanticism movement.

The painting tells the story of the shipwreck of the Medusa frigate. When the frigate ran into trouble, it caused 147 people to be at risk.

After constructing a raft, they sought to be rescued but this didn't happen for 13 days. It was here where dehydration, starvation and cannibalism became the biggest threats for the survivors of which 15 perished.

Captivated by this story, the young artist used it as a platform for his career and spent time researching, interviewing survivors, visiting the deceased corpses, preparatory sketches and even re-creating the raft!

This enabled him to create a vivid piece that was met with as much praise as criticism!

The world of oil painting is exciting and dynamic.

The finish they are able to create can transform a painting and get you in touch with your emotions as you resonate with the feelings captured by the artists.

What's your favourite oil painting? Hit the comments and let us know!

Oil artworks are part of a massive collection of Art, Antiques & Collectables in Auction. Discover how oil, water, pastel and other artworks can transform your home!

For us? It's hard to choose. The artists have used the medium for different reasons but they all come together to explain why the medium is so powerful and versatile.

However, if push came to shove, Starry Night would be the one. It gives you a fascinating insight into the mind of Van Gogh and how he saw the world.

Look out for our piece on watercolours and how their unpredictable nature can impact the finished artwork!

Check out more stories on the Journal.