The most unusual things sold at auction 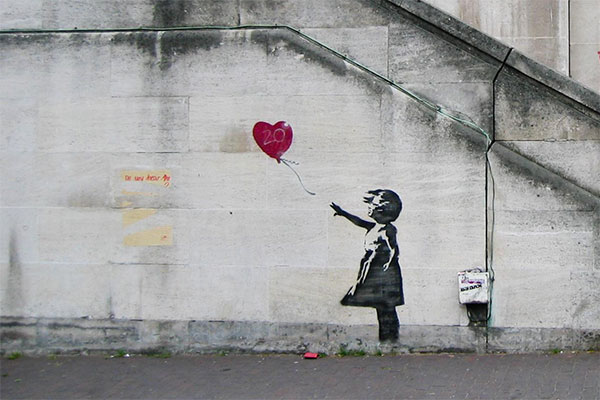 The most unusual things sold at auction

The auction world is packed full of weird and unusual items. Where the most unique things find the widest audience, which is offered from the most diverse range of sellers in the world.
If you want something rare and unique, then auctions are the place to look. With stunning one-of-a-kind artworks to never before seen oddities, it is a world made for the curious.

Throughout past times you could have purchased everything from celebrity clothing to entire empires, and these days it is not much different. Well, you might not be picking up a whole empire anymore, but there is still a lot up for grabs.

Here we will have a look at the most unusual things sold in auctions.

One of the more recent items sold that garnered a lot of attention was a painting from the infamous Banksy. His works themselves could already be considered unusual; however, this one took peoples curiosity to another level. Known for his creations covering walls worldwide this artist has consistently drawn attention both negative and adoring. Covering political and emotive subjects, his work certainly generates conversation. It is also not often sold due to its medium, stencilled graffiti on public walls. The piece in question, however "Girl with a Baloon" was not a piece of brick and mortar, it was a framed image and came up for auction at Sotheby's. While rare in itself this was only the beginning of its unusuality. The real bizarre event happened as the hammer fell at the price of £860,000. The picture self-destructed! No sooner had the crack of the gavel sounded, had the picture began its journey through a shredder hidden within the frame. In true Banksy style, he had created shock, awe and most of all, conversation. The auctioneers looked on aghast as this expensive artwork destroyed itself and the room was in an uproar. Wonderfully, the purchaser agreed to go ahead with the sale at the agreed price. Surely admiring the tomfoolery, anti-establishment statement and, knowing that Banksy's antics could only add value to this piece.

Now, while you don't have to look far to find more unusual items, we are going to venture far back in time to discuss our next. Sure, picking up contemporary artists most recent performance piece is exciting but what if you could secure yourself one of the most powerful empires of all time in the raising of a hand and the swing of a hammer?
You would need something more potent than a Delorean to take you back far enough, one of which coincidentally sold at auction last year. We are travelling back all the way to 193AD! The empire in question was the Roman Empire, and the price that was paid was perhaps higher than one would want. Initially, the cost seemed a real bargain at just 6,250 Drachmasbut paid by a Didius Julianus. This was, however, only a down payment, and the remaining cost was a war and eventual beheading. That is a nasty buyers premium by anyone's standards.

There are, of course, many other fantastically unusual things that have been purchased through auctions. One thing that gathers the attention of the masses appears to be celebrity memorabilia from Kurt Cobain's cardigan which sold for a whopping $260,000 to Marilyn Monroe's "Seven Year Itch" dress that went for a monumental £3.6 million. One of the more unusual pieces of celebrity memorabilia, or rather, parts of celebrity to be sold, was the lock of Elvis Presley's hair! Collecting a giant £90,370! John Lennon's hair has also sold, along with John F Kennedy and Che Guevara's (which was actually sold by a former CIA employee).

Modes of transport are not an unfamiliar auction category, but some are more unusual than others. The most surprising, in my opinion, would be the earliest surviving wheelchair of the late, great Stephen Hawking. Sold for the price of £296,750 at a Christie's auction with all the proceeds going to one of his foundations and the Motor Neurone Disease Association.

It is safe to say that auctions are the place to go if you want something you are unlikely to find anywhere else. There are a lot of unusual things in the world, and exciting buyers and sellers know that they will be able to sell and purchase these extraordinary things in the ever eclectic arena of auctions.

Being an online auction house, we can reach a massive audience of buyers and sellers alike. Want to be "in the room"? You can do that from anywhere in the world, even from the comfort of your own sofa. Search for your next unique item today. You might not find an entire empire, but you are sure to find something special.