The Most Expensive Pink Diamond

The Most Expensive Pink Diamond

The Pink Star Sells in Auction

The Pink Star diamond is one of the most talked-about diamonds out there. Not only because of its intrinsic beauty but also for the amount of money that it sold for in auction.

The story behind the diamond is as remarkable as the price.

It took 18 years before its journey concluded with a stellar hammer price that sent records tumbling.

What's the story behind the Pink Star Diamond? Cast your mind back to 1999. 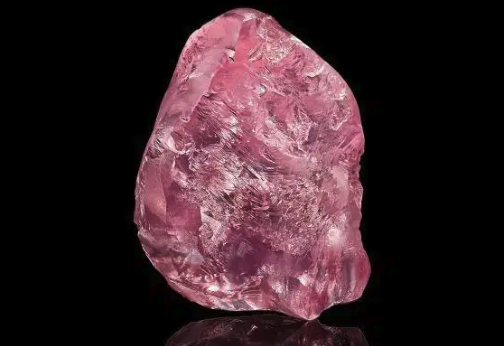 De Beers found a behemoth of a rough stone in an African mine in 1999.

When a diamond is found, it's analysed to find the best cut to produce the highest quality or biggest diamond from that stone.

You can learn more about cut with our guide: Diamond Four Cs Guide - Cut.

In the case of the Pink Star, it weighed a colossal 132.5 carats and took 2-years of artisan-like finesse to transform the rough stone.

After the cutting process was completed, the diamond was trimmed to 59.60cts and cut into an oval shape.

It was taken to the GIA for certification and remains the largest diamond they have ever analysed.

The diamond was graded as being internally flawless which less than 3% of diamonds can boast.

To identify these inclusions, the diamond is put under 10x magnification. You can read more about this in our guide: Diamond Guide - Clarity.

In addition to this, as a fancy-coloured diamond, they go through a different grading process to ascertain its hue, saturation and tone. You can read more about that in our guide: What Are Fancy-Coloured Diamonds?

Now certified as a fancy vivid internally flawless pink diamond, it was paraded around parts of the world before its auction and what an event that was.

The auction was quite lively as bidding started at a massive $56m with an estimate of $60m. The auction didn't waste any time and was over in 5 minutes.

The final selling price was $71.2m which equates to $1.2m a carat! This price beat the previous record set by the Oppenheimer Blue Diamond which sold in 2016 at auction in Geneva.

This is half the amount of time it took Paul Newman's Daytona to reach its record price. Check it out here: Rolex Watches That Broke Records.

The selling price eclipsed the previous record for a pink diamond held by the 24.37ct Graff pink which sold for $46.2m in 2010.

The Pink Star diamond was purchased by a highly-regarded Hong Kong jeweller, Chow Tai Fook who renamed the diamond to the CTF Pink.

This was in honour of their founder Dr Cheng Yu-Tung and their 88th anniversary.

Due to the rarity of fancy-coloured diamonds, are we ever going to see a worthy contender? If so, then we look forward to writing about it!

If you liked the article then hit the share button.