The History of Versace

The History of Versace

There's something about Versace that invokes a feeling of curiosity. Perhaps it's their Medusa-inspired brand logo that compels us to gaze into their presence?

Worn by a host of celebrities and royalty, they have dazzled us with an array of designs that rocked the fashion world and inspired the creation of Google Images!

In 2018, Versace celebrated their 40th birthday and in that time, they have become one of the most luxurious brands in the world.

This brand features in our list of luxury fashion houses where you can bid, win and love and array of iconic handbags. Check out our guide here: Luxury Handbag Auctions.

Launched by Gianni Versace, we're going to explore the Italian fashion house and how they changed fashion.

Image Via - Town and Country Manager

His started his fashion career with an apprenticeships at his mother's sewing business and went onto design at Callaghan and Complice.

His big break came at Genny. He worked his way to creative director and was encouraged to start his own label.

Gianni created the Gianni Versace Company in 1978. He involved his siblings Santo and Donatella who became the brand's muse.

The reason behind the Medusa logo comes from mythology. She made people hopelessly fall in love with her. This charm worked for Versace too!

The whole world falls for Versace

Versace was a hit, instantly. They won numerous awards and designed outfits for films and theatre.

They were considered Haute Couture in the late 80's which illustrated their ascension to the big league.

Now expanding throughout Europe, they were also extending their product lines in areas such as homewares, furniture and accessories.

Versace was making their mark in fashion but had another curveball to throw at them.

When fashion and Music came together

Gianni was strongly linked to the music industry and counted the likes of Michael Jackson, Cher, Sting and Elton John as his friends.

Linking fashion and music was a first and Versace made it their own by creating clothes for them.

It was here where the medusa effect went into overdrive as these musicians were icons of their time and still to this day but now, they were wearing Versace.

The interest in the brand went nuclear and fans were asking who and what are they wearing.

At the height of their success, tragedy struck the company, as their founder, Gianni was murdered.

On July 15th, 1997, Versace was thrown into turmoil when their visionary leader was the 5th victim of serial killer, Andrew Cunanan.

After killing Gianni, he committed suicide 8 days later. This tragedy was re-created in a TV series called 'The Assassination of Gianni Versace: American Crime Story'.

Donatella became the creative director and her brother, Santo became the CEO.

Despite the passing of Gianni, the brand continued to create an array of designs that represented Gianni's vision and got the world to fall back in love with Versace again.

Versace has a certain panache for designs that are exciting, unpredictable and extremely popular.

Creating designs laden with sexuality and/or sensuality, people are able to steal the show, break the internet or both.

This was a time they created a string of designs that inspired a whole generation of designers and put celebrities on the map.

So, what were they?

Baroque prints came into fashion during the late '80s.

Gianni transformed it by making the prints raw and dynamic. In the silk design, he including Medusa heads and leopard skins which culminated into an eye-catching look.

The likes of Cindy Crawford and Linda Evangelista ensured Versace entered the 90's the same way they left the 80's.

When J-Lo Broke the Internet (The 1st Time)

If you ever what inspired the creation of Google images, look no further than this stunner worn by Jeniffer Lopez whilst she attended the 42nd Academy Awards in 2000.

Designed by Donatella Versace, this jungle green dress became so famous, it has its own wiki page and is still regarded as one of her most famous designs.

Designed with a low neckline, it's a see-through silk chiffon dress with a citrine-studded crotch and patterned with bamboo and tropical leaves.

Lopez wore the dress again in 2019 and was given a rousing reception!

One of the most empowering designs in the world.

The Oroton design is essentially a metal mesh of hard metals but completely draped in silk.

To commemorate Gianni and the maison's 40th anniversary, Versace performed a special celebration.

This celebration involved an array of classics and even featured the legendary Naomi Campbell, Cindy Crawford, Helena Christensen, Carla Bruni, and Linda Evangelista.

First seen in 1984, it cemented Gianni as a forward thinker and also a new signature design for the fashion house.

The idea behind the design was to give the wearer the illusion of being dressed in liquid metals. 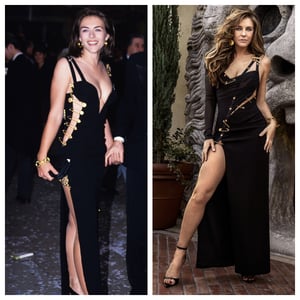 Before Elizabeth Hurley became a global star, she wore a dress that catapulted her across the line.

Whilst dating Hugh Grant, she attended the premiere of Four Weddings and a Funeral in a plunging gown held together by safety pins.

The dress is still talked about today after a recent modernisation. 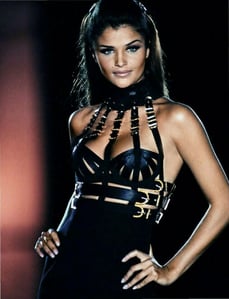 1992 was an interesting year because Versace introduced us to their bondage collection.

Titled 'Miss S&M', it polarised the fashion world and was met with praise and criticism.

The runway was an interesting spectacle because Versace made so many fantasies come to life. Using skin tight leather or just lots of it, they 'dominated' the show.

The story of Versace is phenomenal.

Their impact on fashion design is extraordinary. Their innovative use of metals and other materials has deified an array of their designs.

The acquisition of Versace adds to his portfolio which includes Jimmy Choo. With planned expansions on the way, it marks a new era for the brand.

Donatella will stay on as creative director of the fashion house but it gives Michael Kors an opportunity to enter an exclusive market.

What are your thoughts on the Versace story? Hit the comments and let us know!

Is your next it-bag in auction? Check them out here!