The History of Patek Philippe

The History of Patek Philippe

A Pursuit of Perfection

Being family owned, each generation has created a legacy in time for the next to take over and by doing so, it's forged a connection between the past and the future.

This knowledge and expertise has enabled Patek Philippe to push themselves to new realms which inspired some of the most complicated watches in the world.

To recognise Patek's incredible contribution to watchmaking, we explored their story.

Patek Philippe can trace their origins back to 1839 when Antoni Patek started a partnership with François Czapek and formed Patek, Czapek & Cie.

Specialising in haute Horlogerie, they gained a reputation for striking timepieces.

At an industry event, the future of Patek & Cie would change forever as it was here where Patek met Jean Adrien Philippe.

Stunned by the skill of Philippe, Patek invited him to Geneva and later Philippe joined the company. In 1851, Patek & Cie became Patek Philippe & Cie.

The goal was to develop and manufacture the finest timepieces in the world.

This feat was achieved in 1933 when they created The Super complication. This incredible timepiece housed 24 complications!

They didn't stop there and since then, Patek Philippe has gone on to create a series of collections that carry with them their own philosophy.

Patek Philippe is said to have over 200 different models in production at the same time. However, the examples made are limited.

To ensure the quality of their watches, they created the Patek Philippe Seal in 2009.

The criterion for their own seal is the strictest in Swiss watchmaking and illustrates the expectations they have for their timepieces.

One of these expectations are for their watches to last for generations. Check out this 5 generations advert.

The advert shows the bond shared between mother and daughter and father and son. The message behind the advert is starting your own tradition through bequeathing items to the next generation.

Now that you know about Patek Philippe, check out some of their collections.

Launched in 1997, the Aquanaut was a hit for the watchmaker.

The octagonal shape of the watch bears elements to the Nautilus but the Aquanaut is something different.

When it debuted, it was young, modern and unanticipated - or was it the tropical strap?

Either way, it completely refreshed the brand and remains one of their most popular models. 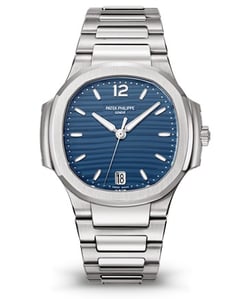 Released in 1976, the Nautilus was designed for people who had active lifestyles but didn't want to compromise on class.

One of the most striking features of the watch is its porthole-like case design.

Paired with a rounded octagonal-shaped bezel, it creates a devastating combination.

The Patek Philippe Nautilus collection is one of their most famous collections and an exemplar for sports watches for over 40 years. 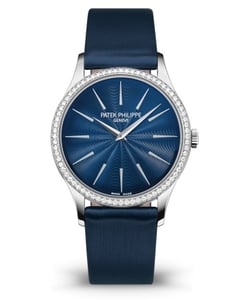 For over 80 years, the Patek Philippe Calatrava range has acted as a fine example of their style.

Devastatingly elegant, this collection contains some of their most aesthetically pleasing watches.

But what makes it so pleasing?

You can attribute this to the Calatrava's sense of understated perfection. This key success factor has enabled the watch to charm its way into the hearts of countless watch wearers.

Patek Philippe has shown their expertise with the Calibre 89 which consisted of 33 complications and 1,728 components!

In 2014, the Grandmaster Chime became the most complicated wristwatch with 20 different complications.

There's a reason why Patek Philippe is one of the world's finest watchmakers.

Their story boasts milestones and achievements that are a testament to their goal to make the finest timepieces in the world.

Their tradition and ability to not compromise on class has inspired an array of watches which lead their respective classes.

Patek Philippe is a watchmaker that you can find in our online catalogues of luxury watches.

Discover our range and see what you can bid, win and love today!