The History of Gucci

The History of Gucci

Gucci - Top of the Fashion Mountain?

Enjoyed by the likes of Brad Pitt, Rihanna, Kristen Stewart and Blake Lively, the Gucci train is certainly going strong.

Becoming a fashion powerhouse is not easy. With the likes of Chanel, Louis Vuitton, Dior, Versace and more, innovation and risk is the name of the game.

Creative Director, Alessandro Michele, seems to have found a winning formula after the sudden departure of Frida Giannini.

In this spotlight, we're going to explore Gucci's journey to the top which is full of triumph, tragedy, risk and resurgence. 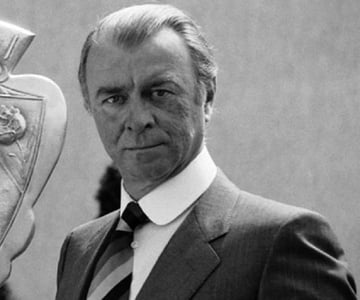 Gucci was founded by Guccio Gucci (1881-1953). After working abroad, he returned to Florence in 1902 and worked for Franzi, a leather manufacturer.

Honing his skills for nearly 20 years, he founded Gucci in 1921.

Opening his first store on Via Vigna Nuova, they initially sold leather bags before expanding to luxury luggage.

Running the maison for over 30 years, Guccio Gucci passed away in 1953 and left the company in the hands of his family.

Aldo, Vasco, Ugo and Rodolfo took over the brand and made real their ambitions to enter international markets. They opened stores in London, New York, Paris, Hong Kong and Tokyo.

Over time, Gucci created an array of designs that got everyone talking about Gucci. Check out some of their most iconic designs.

From the Bamboo Bag to loafers, Gucci has a number of designs that cemented them as a house of Haute Couture.

Here we pick out some of their greatest. 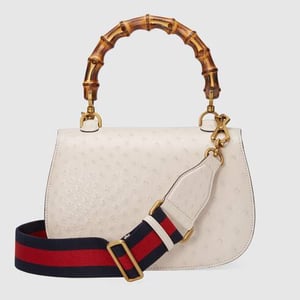 A timeless classic that was brought back to life by Frida Giannini and carried by the likes of J-Lo, Amy Adams, Beyonce, Princess Diana and Rosie Huntingdon-Whiteley.

Due to Italy’s involvement in the world wars, sanctions were placed on vital goods such as leather which heavily impacted Gucci.

Faced with a potential problem, Gucci responded with the iconic Bamboo Bag.

The bamboo was melted down and curved into a handle for a sac that was inspired by the shape of a saddle. The bag was aptly named the Bamboo bag. 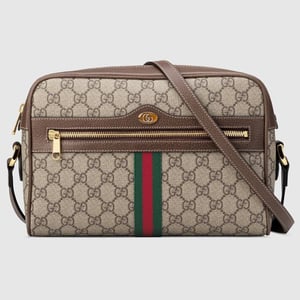 Every fashion house has their signature. Examples include the red sole from Christian Louboutin, the LV Monogram from Louis Vuitton, the Burberry check and more.

In 1951, Gucci created the triple web stripe after opening their first store in Milan.

Handbags adorned with the triple stripe can be found in auction along with other it-bags. Take a look at our guide here: Luxury Handbag Auctions.

It's frequently used across their entire offerings such as handbags, purses, suitcases and even cars.

Trivia - Originally used as a bag fastener, the GG logo was used on the canvas of Gucci products in the 1960's and is now present on nearly all of Gucci's designs. 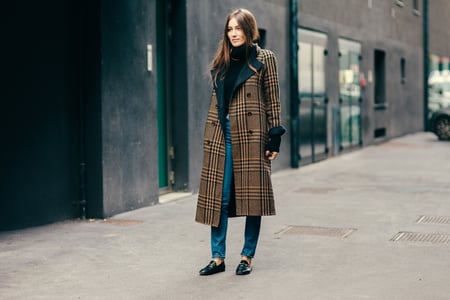 Image Via - Shot by Gio

Celebrities who can't get enough range from Jennifer Aniston and Gigi Hadid all the way to Jaden Smith and Kris Jenner!

Simple yet so effective, the Gucci loafers date back to the opening of Gucci's store on Fifth Avenue.

Equestrian-inspired, it's influenced an array of future designs by Gucci to include boots, moccasins, espadrilles and more!

Remember the story behind The Lady Dior Bag?

Princess Diana was snapped wearing one and Dior honoured this by naming the bag after her.

The story resonated with Hermès and the Sac à dépêche which is now the Kelly Bag.

While Jackie Kennedy was the FLOTUS, she was often snapped carrying a particular Gucci bag. Gucci recognised this by renaming it to The Jackie Bag. 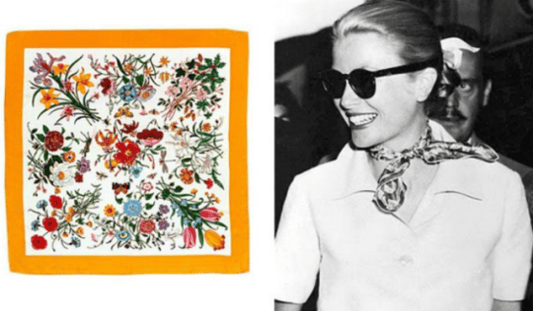 The Flora scarf print was designed for the American actress turn Grace of Monaco, Grace Kelly.

The Actress had a penchant for flowers and Gucci used it as the inspiration for their canvas.

Designed by Rudolfo Gucci in the mid 60's, it soon caught the eye of Audrey Hepburn and a host of other stars.

An inspiration for future designs, it's adorned the design of bags, dresses, shoes and more!

Gucci continues to be a staple of high-end fashion and celebrated the launch of their global flagship store in New York with a benefit “A Night to Benefit Raising Malawi and UNICEF.” co-hosted by Madonna and Frida Giannini.

Now under the creative eye of Alessandro Michele, the Maison has gone from strength to strength and feature regularly in the most-searched fashion brands across social media.

Gucci will soon be celebrating their centennial in 2021 and in that time they have gone from selling leather handbags to becoming one of the biggest fashion brands in the world.

Take a look at our beautiful collection of Gucci products currently available at William George by hitting the link below!