The History of BVLGARI

The History of BVLGARI

Bulgari is an Italian luxury jewellery maker who harnesses the seven arts to create some of the most exceptional pieces of jewellery in the world.

Attracting an envious clientele which feature the likes of Elizabeth Taylor, Anna Magnani, Sophia Loren, Gina Lollobrigida and more, they established themselves as a fine jewellery maker with innovations that pushed the boundaries of design.

In this spotlight, we'll delve into the history of BVLGARI and how they became one of the most recognisable jewellery makers in the world.

BVLGARI can trace their origins to 1884 when Sotirios Voulgaris, a Greek silversmith, opened his first store in Rome, Italy.

BVLGARI's early designs focused on silverware inspired by the likes of Paris, the Byzantine Empire and art.

These inspirations culminated in designs highly regarded for their Italian craftsmanship and vibrancy.

This reputation prompted two of his children, Giorgio and Costantino, to recommend create high jewellery which led to a significant period for BVLGARI. 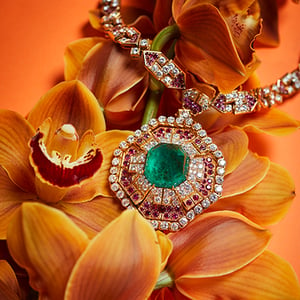 BVLGARI came alive during the '50s and '60s which is considered their golden era.

Their jewellery was influenced by a new ideology that focused on symmetry, bright hues and diamonds which created a sense of harmony.

With this approach, they were in pole position to capitalise on the romanticisation of Rome by Hollywood.

At this time, the likes of Audrey Hepburn and Elizabeth Taylor dazzled screens with memorable performances in films like Roman Holiday and Cleopatra. However, it was Taylor who formed a strong relationship with the brand.

Her affinity for jewellery forged a close bond with BVLGARI and it resulted in a collection of jewellery so big, it sold for $115.9m at auction in 2011 by Christie's.

BVLGARI acquired 9 pieces and house them in their museum.

Inside BVLGARI's flagship store on Via Condotti, they house a museum which chronicles the story and evolution of BVLGARI.

What you can expect to find there are sketches, photographs and jewellery pieces from an array of clientele such as Elizabeth Taylor.

To explain how BVLGARI has evolved, we've explored some of their most famous collections.

BVLGARI are proud of their Roman roots.

In 1932, they changed their name to BVLGARI which is inspired from the alphabet of ancient Rome.

When designing the B.Zero1, they sought inspiration from the Rome Colosseum and merged it with their Tubogas style.

Launched in 1999, it's become one of their most popular collections.

Image Via - The watch source

A serpent can signify many things. For example, deception, seductiveness and strength. For Bulgari? It was wisdom, rebirth and vitality.

Created in the 1940s, their Serpenti jewellery line was carefully perfected over the course of 15 years. The solution was a spring placed in the coils to enable flexibility.

The collection was given a boost by Elizabeth Taylor's portrayal in Cleopatra and which helped the collection become a must-have.

During the 80s, there was a need for jewellery that was easy to wear in the workplace and transition into a piece of jewellery for the night.

Bulgari responded to this with the Parentesi range. This collection became popular due to its boldness and versatility and BVLGARI used this design in their watches as well.

The Parentesi sign came from the travertine junctions used to link the stone blocks in Rome.

The BVLGARI Tubogas technique is an example of fine jewellery making.

Sleek, elegant and flexible, this technique debuted on the Serpenti range and became a huge hit for the brand and still to this day!

The process involves a long bands of precious metals like gold being wrapped around a tube horizontally.

As the metal is coiled, the bands interlock and mask their inner structure. This culminates in the technique creating a sense of flexibility and the snake itself being brought to life.

The watch has evolved over the decades, and included different metals such as white, rose and yellow gold along with steel.

BVLGARI remain one of the most popular jewellery brands in the world.

This encouraged LMVH to acquire the brand in a €4bn deal.

Despite being owned by the French luxury goods conglomerate, they still maintain their links to Rome.

In 2016, they donated €1.5m to restore the Spanish Steps. This involved the cleaning, reinforcing and protection of this landmark.

With their new Cinemagia collection, inspired by the world of film, already turning head, we look forward to writing about the best bits!

BVLGARI is a luxury jewellery maker which you can find in our auctions but who else is on this prestigious list? Check out our guide: jewellery and gemstones in auction and see who else you can discover!

Head back to the journal for more stories!