The day I became a millionaire 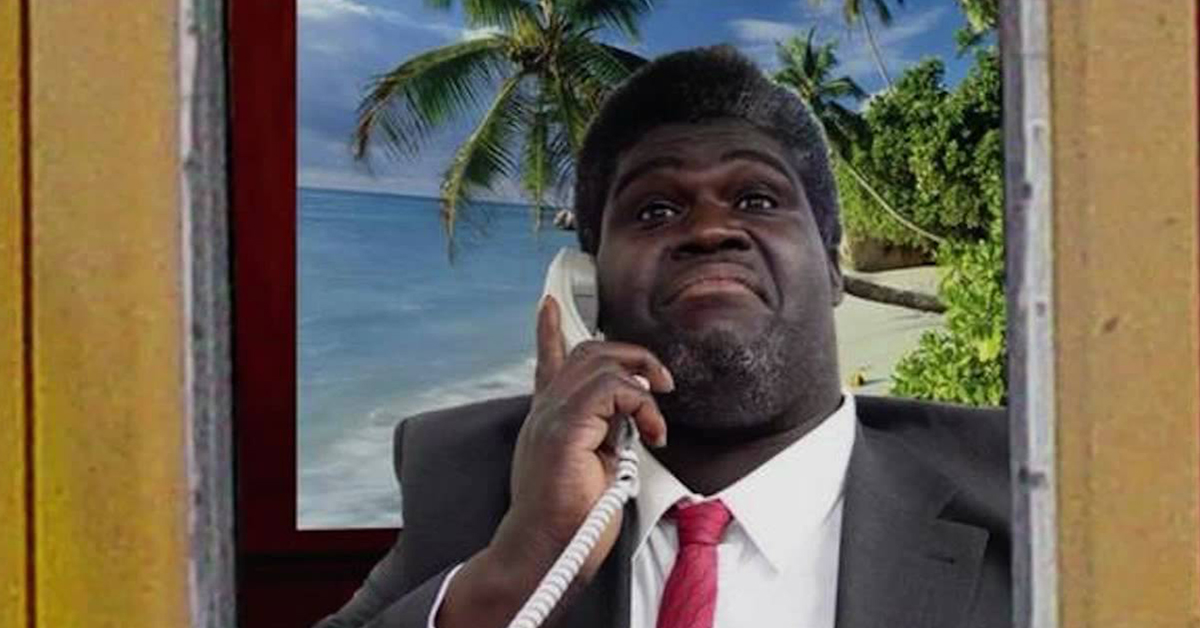 The day I became a millionaire

So January is long.

I don't know about you but the Christmas period mixed in with a 5 week pay month has left me feeling less flush than before.

Imagine my joy when I received an e-mail out of the blue promising to make me a multi-millionaire. All that was required was some basic details about myself.

I know first impressions are important but this was a strong lead-in.
The correspondence, initiated by the honourable Barr Donald Davies promised to be fruitful but was unfortunately prompted by the death of Don's client of the same surname as my colleague Mark. 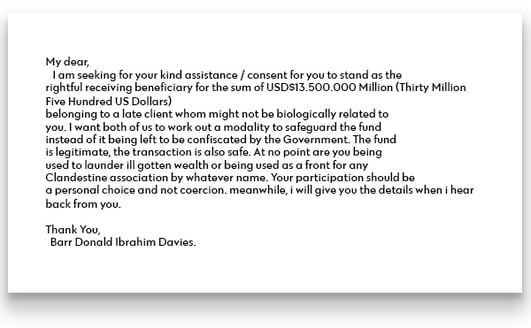 Now, fortunately, I am wise to such schemes and decided that Don and I were to have some fun.

Now I certainly don't have Sherlock Holmes powers of deduction but I sensed Donald was somewhat excited to get a response... 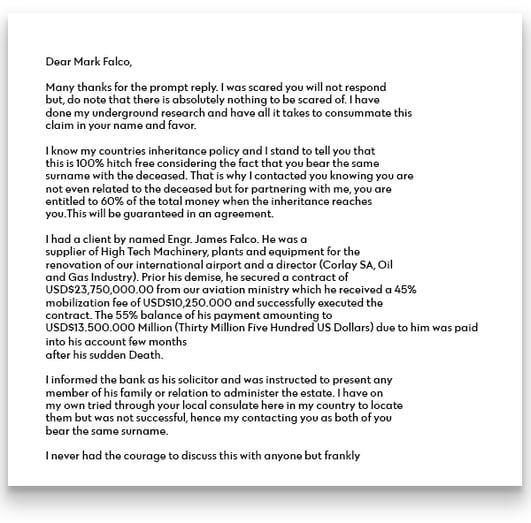 Now, you are aware of the phrase "give them enough rope" and I feel Donald managed to get his hands on a few yards of it in this email. Questions that had never been asked were offered answers and those answers were alarming. Donald spoke of the oil sector, the banking industry and whether he did or did not mastermind the death of his ever so wealthy client.

I felt we were getting to know each other, I decided to respond more casually as we were now obviously friends about to go into business.
I, of course, asked for some reassurances due to the nature of my becoming a beneficiary. 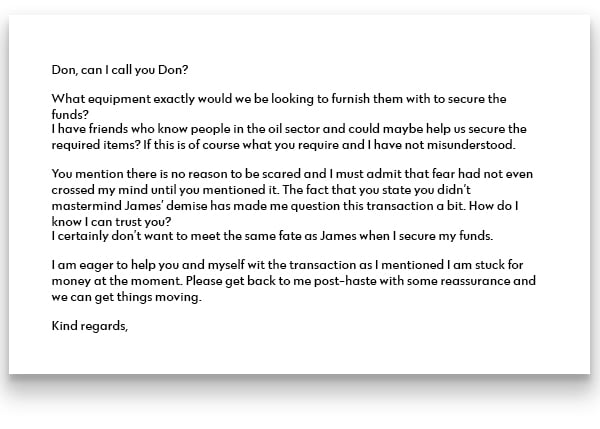 Don, rapid as ever utilising a communication style similar to a crows flight responded and got straight to the point. Offering no reassurance he began trying to extract the necessary details for our official business dealings.

As grateful as I was for his efficient, "cut-throat" business style I still had some questions. I decided to involve a third party. The virtuous Detective Constable Jonesworth. Incredibly similar looking and sounding to myself but, absolutely, NOT the same person.

Informing Don of my intended line of investigation prompted him to inform me of the Top Secret nature of our deal. This had turned in to a real thriller. Not only was I about to complete my first multi-million-pound business but it had a feel of espionage about it. Who'd have thought, humble old me would become an international man of mystery. 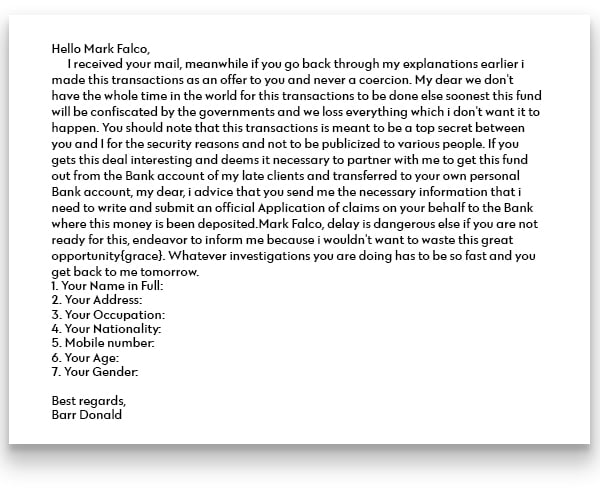 DC Jonesworth went right in with the ol' switcheroo and in the style of Don himself, went straight for the details or failing that a face to face meeting. 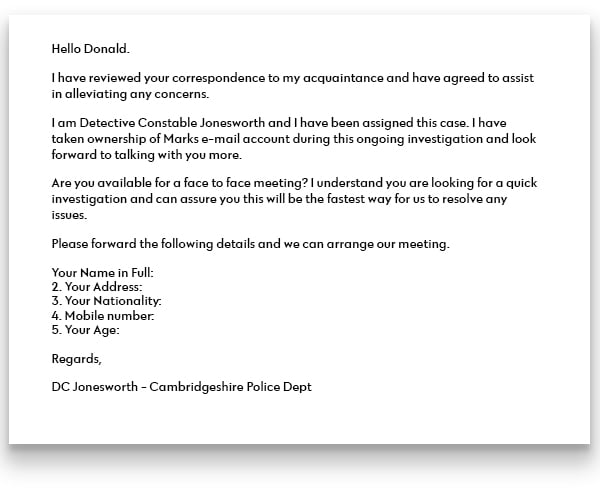 Clever as ever, Don did a dodge and swerved relinquishing his details. We'd entered into a game of 1 upmanship and Don returned my serve by agreeing to meet. Just a swift jaunt to Togo Africa was all it would take to put a face to the name. 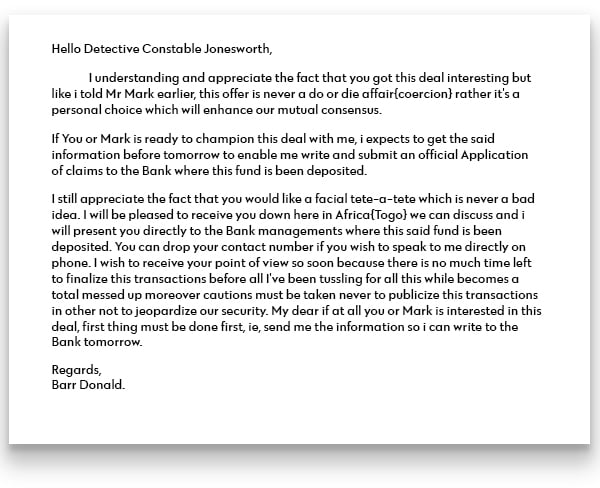 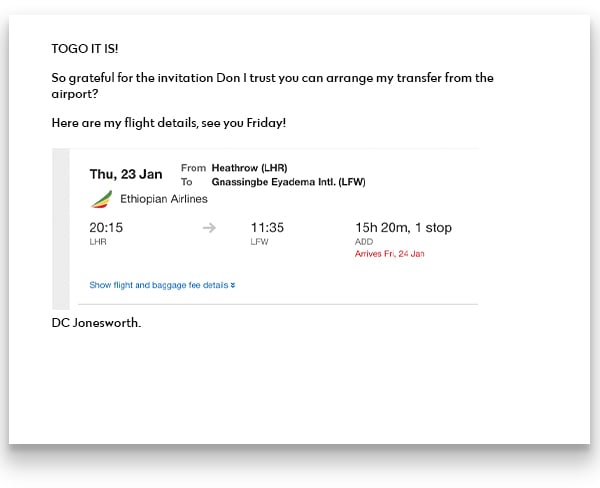 Of course, I am not going to Togo, whilst Dons offer is very intriguing, it is also nonsense.
Being a web-based business, William George needs to be savvy to all types of internet fraud and we pride ourselves on our security.
With constant training and communication, we keep up to date on internet security at every turn.
You can be confident when partaking in our auctions, whether signing up to the site or making a payment, we make sure your information is secure at every step.
So the Don's of the world are kept at bay and you can bid, win and love amazing items with a sound mind.