Have you ever sat at your steering wheel looking out at the congested road in front as the glare of the brake lights scorns your morning eyes and wondered, when did I get sick of driving?

Sure there was a time when you were seventeen (not counting you rogue younger ones rocking around airfields and farmland) when you got behind the 1l engine of your new pride and joy and would have gone anywhere at a moments notice.

"No problem, I'll go" You chime in eagerly.

"Grandma and her girls need collecting from the weekly bingo outing"

"On my way" you respond and before the front door even shuts the engine's on and you are on your way.

Those were the days where your passion was unshakeable, the desire was strong and engine size was irrelevant. You just needed four wheels and a reason to move, however, somewhere, somehow, the milk runs and bingo calls didn't cut it anymore.

At least that became the case for Arne Toman, Doug Tabutt, and spotter Berkely Chadwick. The people responsible for smashing the Cannonball run record!

For the unfamiliar, The Cannonball Run is a gargantuan journey spanning 2,825 miles from coast to coast USA. Starting up the engine at New York City’s Red Ball Garage and finishing at the Portofino Inn in Redondo Beach, California.

That is pretty far by anyone's standards and most would be rubbernecking for the nearest roadside stop off after at least three hours but not these guys. With a modified fuel capacity this car wasn't occupied by anyone looking to stop if they could avoid it. They weren't looking to be stopped either with the car being heavily modified to avoid any interruptions.

A Silver Mercedes-Benz E63 EMG stripped of badges and identifying markers while being tuned to 700hp and jammed full of radar detectors, laser jammers and police scanners. A wolf in sheep’s clothing if you will.
There were also 18 scout vehicles positioned to look out for speed traps and other possible hindrances. 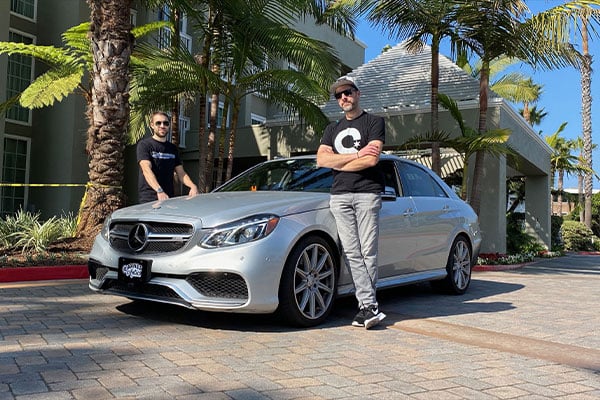 You probably do need a little bit of help if you're looking to travel 2,000 miles in just a little more than a day. Going an average of 103mph helps a little too. With a top speed of 193mph Arne Toman, Doug Tabutt, and spotter Berkely Chadwick completed the mammoth run in an astounding 27 hours and 25 minutes.

Sure there may have been a slight bending of the rules of the road but
Toman said he’s not too worried about any law enforcement issuing any citations after the fact. He has however decided to wait a year to release any potentially incriminating video of the feat.

So if you're sick of grandma getting her bingo card dabber fluid all over the upholstery or you just want to re-ignite your relationship with the road... there's a new record in town and it needs breaking!