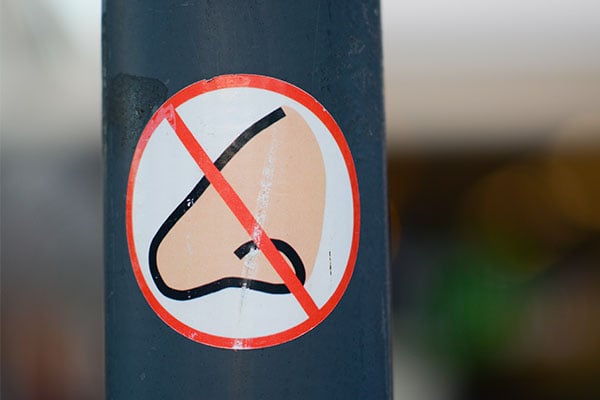 I have long had a friend who has no sense of smell. I am also an awful mate who forgets this regularly shoving craft beers or delicious meals into his face while exclaiming how great the aroma is.
He calmly reminds me, and we carry on. Good guy. Well, never again!

This week I had the crash course in not smelling coupled with a b tech in taste deprivation. The bleak landscape revealed itself before my senses out of nowhere. At some point, the switch clicked, and food and drink became either just, solid or liquid.

Was this karma? I believe currently pronounced Corona, whatever it was I didn't like it. Most of my friends and colleagues will know I live through my face. A keen snacker and fond quaffer of the odd stupidly named beer or 5. A fresh challenge that was going to test me.

I went to bed that Saturday, feeling confused and wondered when it would return.

The morning came, and I sprang from my bed, excited to see if the sensory deprivation had lifted. I hurriedly grabbed the soap, let out my best rendition of happy birthday and awaited the waft of lavender or whatever the scent was supposed to be from my dutiful handwashing.
Nothing! Not a hint. I piled down the stairs and posted some bread in the toaster, only a matter of moments I thought until that sweet burnt smell would hit my nostrils. (I really should sort my toaster settings). Again, there was nothing. I could have set the place on fire and not realised. I slapped some peanut butter on and had myself a texture fest with none of the flavours.

Each day I would try and smell something pungent. As if it would awaken my senses, like a boxer and some smelling salts in an old movie. Monday, pickled onions, Tuesday, all the cheeses. Wednesday I decided to drown myself in vapour rub becoming a virtually radioactive house member blinding everyone with menthol while smelling 0. Was this it? Would I forever be devoid of smells and tastes?

Cue Friday. I trudged my way to the bathroom and began to whisper a half-hearted attempt at the birthday mantra. My mood suddenly lifted as I caught a minute whiff of some flower. I could smell the soap, it was mild, but it was there. I got so excited I nearly ate some, I managed to refrain as the quarantine supplies aren't that low. I then spent the morning running around testing everything. All the shower gels, deodorants, foods I could think—the more offensive, the better. Vinegar was a real awakener, and while I wasn't back to full nasal capacity my anosmia (the loss of the sense of smell, either total or partial. It may be caused by head injury, infection, or blockage of the nose) was subsiding!

Whatever the cause of this phenomenon, it has taught me some vital things. Smelling and tasting are extremely important to me. If I had to stay inside forever but without flavours, I couldn't take it. Finally, sorry, Ken, I won't shove my beverages and meals facewards any longer.

It is safe to say that I am now enjoying the finer things in life once again. Such as knowing when the toast is ready or when I should take a bath!
So wake up and smell the coffee yourself, we are always open with auctions to keep you occupied. Don't go mad obsessing over your senses while in quarantine, browse some catalogues and take your mind off it all!