King Henry VIII and the garments of Royalty

King Henry VIII and the garments of Royalty

Remember when you were 17 and started embarking on romantic relationships. Indulging in frivolities and getting swept away in it all so much you felt like you could lose your head?

Today we look at an exciting auction lot from Henry the VIII.

Imagine becoming King around that age, a responsibility laid at the door of Henry in 1509. The tumultuous Tudor changed things up a bit and became one of the most famous monarchs.

Known for his difficult romantic life and a smattering of rule changes for personal benefit, he doesn't sound so different from you or me at that age. We know Henry was extravagant spender who turned monies from the dissolution of monasteries, reformation of parliament & Rome into sovereign funds. Yet he was consistently on the brink of financial ruin which to be fair sounds like most 17-year-olds I've ever known. The main difference was near-absolute power. Something I'm pretty confident, none of us had!

Like any "youngster", the image was important to Henry. If Instagram were around back then he'd probably have an account filled with pictures of him in the latest gear partaking in jousting and hanging out on the Mary Rose with a group of ladies in fine linen shifts. He enjoyed holding sporting tournaments to help convey this dashing and robust image.  He wore gilded armour and gilded horse trappings, and outfits of velvet, satin, and cloth of gold with pearls and jewels. The Gucci and Louis of his time perhaps? Safe to say he'd probably get a like or two!

It is his care for beautiful garments that we are focussing on today. Brought to the forefront after seeing an incredible handwritten letter grace the auction catalogue pages from the man himself.

The lot in question: 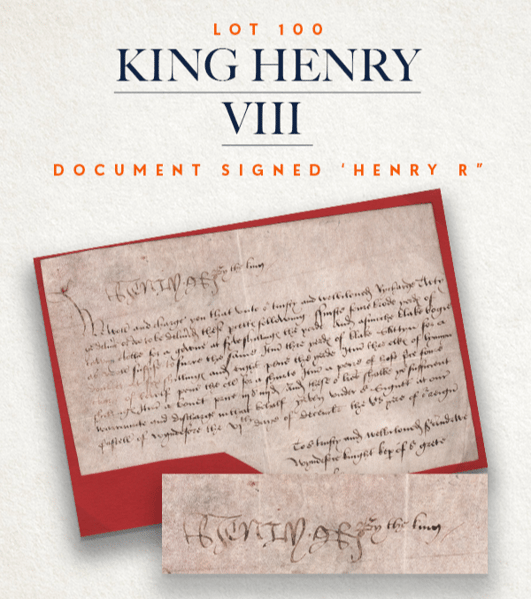 Warrant written at Windsor Castle, in English on parchment, to Sir Andrew Windsor, Keeper of the Great Wardrobe, ordering him to supply various materials to Richard Twety to be made into a gown, a shirt, a doublet, a pair of hose and a bonnet, headed "By the King" and signed "Henry R".

A fine and rare Henry VIII signed document, written in just the fifth year of his reign (a year in which he took part in the invasion of France) when the King was only 22 years old.

Seems pretty similar to today's youth. You get a bit of dosh, so you kit out your whole team. Only instead of Supreme hoodies and Balenciaga's it is Tawney cloth and black satin!

On a side note, the love for clothing seems to have lasted through the ages along with truculent young royals. Prince Harry has defied her maj's orders and is skipping off to the private sector after he & Meghan moved to trademark "Sussex Royals" to cover a range of services including clothing!

Unfortunately, I don't imagine we will ever see a beautifully handwritten letter in auction for this clothing request. Maybe someone will supply a USB with the original e-mail on, but I fear it won't hold the same allure as Henry the VIII's incredible letter.