You're at the end of Fashion Week! What's was your favourite show? Did any designers surprise you?

Attracting one of the most diverse schedules on the calendar, Paris is renowned for its Haute Couture along with Men's fashion and Ready to wear (Prêt-à-Porter).

Featuring spectacular locations like the Eiffel Tower and River Seine, there are no punches pulled when designers want to make a hit.

It was Givenchy and Yves Saint Laurent who kicked off Paris Fashion Week back in 1973 with a spectacular Fashion Face-off. Who were up they up against?

Paris Fashion Week began and did so in some serious style. It was the scene of the famous 'Fashion Face-off' between French and American designers.

Since its inception, French Fashion has become a €150bn industry and achieved worldwide fame from its iconic designers who put Paris on the map.

What Can You Expect at Paris Fashion Week?

Paris and Milan share the accolade of unpredictably spectacular fashion shows. You can check out Milan's iconic moments here: What Happens At Milan Fashion Week?

Designers will go to extraordinary lengths to steal the spotlight from rival designers. You may have already heard about L'Oréal and their fashion show on the River Seine but that's just the start! 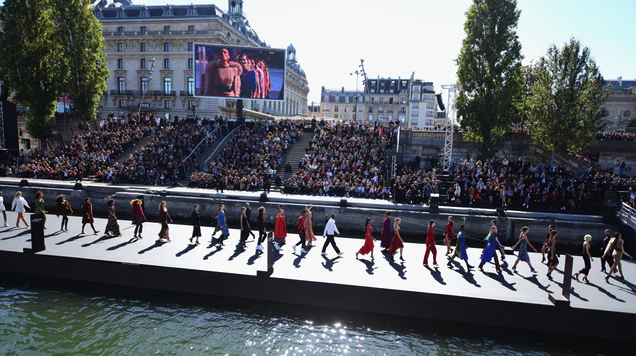 Image Via - Business of Fashion

They say that you have to see it, to believe it.

Paris Fashion Week has contained moments that went beyond imagination and what's remarkable is the fact that it worked!

L'Oréal Fashion Show on The Seine

L'Oréal pulled it out the bag with a stunning catwalk on The Seine.

It's estimated that 200,000 watched the show with many more catching the online stream.

The show celebrated beauty but covered people of different ethnicity, age and size.

Watch highlights of the show with this video!

Chanel and The Grand Palais

The Grand Palais functions as a historical site, exhibition hall, museum and some of Chanel's greatest feats.

Chanel recreated a huge replica of the Verdon Gorge, had a rocket, giant lion, waterfall and more!

Their creativity knows no boundaries and, each year, they reinvent themselves with an outrageous show. Take a look at the video which chronicles some of their shows.

Fashion might be temporary but Chanel's style is permanent.

So, the Eiffel Tower is one of the most well-known landmarks in the world. Each year, 7 million people visit.

During the show, the Eiffel Tower was on cue and dazzled the crowd who were seated in stands either side of the runway.

It's hard to compete with backdrops like this but Fendi have done a fashion show on the Great Wall of China!

In 1998, John Galliano pulled off one of the most extravagant fashion shows ever seen!

The show ended on the marble steps of the Opera Garnier in Paris where paper butterflies fell on the models.

At the time of the show, Galliano recently started at the legendary Dior brand.

Louis Vuitton, The Louvre and the Train

Taking over the Louvre is one thing but putting a real train in there for your show is another.

Louis Vuitton took fashion shows to new levels when they presented their accessories' collection at The Louvre.

The models walked off the train which pulled into Cour Carrée and porters brought their accessories with them as part of the show!

This collection helped bring back sentiments of luxurious travel and their brand heritage.

What was your favourite moment? For us, it was Louis Vuitton going full steam ahead in the Louvre and rolling back the times with their travel collection.

The feats pulled off by these designers just illustrate the level of creativity found in French fashion. It's been a mainstay ever since its inception over 40 years ago.

As you read earlier, it's the venues that can help steal the show as well and Louis Vuitton, Chanel and L'Oréal's use of these landmark places just added an extra level of enchantment to their collections.

The end result is you and I talking about it long after the show has happened!

If you want to get involved with Paris Fashion Week then check out the schedule for Fashion Week.

Read more stories on The Journal by hitting the button below!