What is New York Fashion Week?

New York Fashion Week (NYFW) forms part of the 'big four' along with Milan, Paris and London and is widely known for its sportswear and high-end fashion shows.

In 2018, NYFW celebrated its 75th birthday and remains one of the oldest fashion shows on the calendar.

To put NYFW into figures, it's been estimated that over 125,000 people attend NYFW every year and it generates over $850m!

The likes of Vivienne Westwood, Oscar de la Renta, Ralph Lauren and Marc Jacobs are often on the schedule which shows the significance NYFW has.

In this guide, you'll learn about what happens at NYFW and its iconic moments.

In our previous article: What Happens at Fashion Week? you received an insight into one of the most exclusive events in the world and what happens there.

With a host of highly anticipated shows and fashion designers eager to start fashion season with a bang, it's lead to moments that have gone into the history books!


Ralph Lauren celebrated his 50th year as a fashion house in style and took over Central Park and the Bethesda Terrace in New York.

Boasting wide appeal, the show featured all of his ranges on the same catwalk!

150 models took part and illustrated the past 50 years of Ralph Lauren and what's inspired him throughout that time.

After the event, the party continued where guests and other designers were invited to dinner. Among those included were Hillary Rodham Clinton, Kanye West, Carolina Herrera, Vera Wang and more!

For 37 years, Carolina Herrera has been at the helm of her eponymous label and the 2018 fall show was to be her last.

An emotional finale, it featured her most iconic looks. Check out the video for an insight into the show!

With the baton being passed to Wes Gordon, all eyes will be on him as he continues to fill the immense shoes left behind by this designer.

As far as takeovers go, this is one of the best.

This collection saw a blend of working girl and The Matrix to create a bold show.

To mirror the setting, there were many references to '80s fashion and it came together to create a memorable show.

Everyone loves a comeback and this one was a wave of nostalgia flooding the catwalk.

Christy Turlington, Pat Cleveland and Patti Hansen were on the catwalk again for the likes of Michael Kors, Marc Jacobs and Hellessey.

A memorable throwback, it illustrated that these iconic supermodels haven't lost their touch!

In this video, you saw Pat Cleveland's runway dance!

Who will we see in the next fashion show? 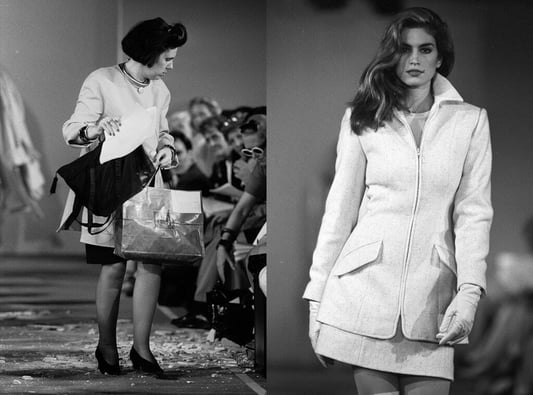 Michael Kors is responsible for one of the most dramatic fashion shows of all time and it's not a good thing.

His 1991 fashion show was blaring with Odyssey's song 'use it' and the bass was so loud, it caused an actual cave in!

Kors was unaware of this until Naomi Campbell told him. When he saw the damage, all he needed to do was look at Suzy Menkes and Anna Bayle!

However, as the fashion never stops, the show went on!

Once the dust cleared, everyone stayed and Cindy Crawford lead the finale.

What was your favourite moment? Hit the comments and lets us know!

If you want an in-depth insight into this season's show then head over to the NYFW website for the full schedule.

After New York Fashion Week, the show heads to London. There will be a different type of style here as London is known for their avant-garde tone.

To get an insight into that, check out our guide: LFW - A Guide to London Fashion Week.