Damien Hirst medicine cabinet could sell at auction for £1.8m

Damien Hirst medicine cabinet could sell at auction for £1.8m

Damien Hirst's 1989 piece "Bodies" is coming up for auction in London next month. The piece is a doorless medicine cabinet packed with jars, bottles and packets of drugs and treatments. It features some popular products such as Optrex eye drops and Dioralyte rehydration sachets.

Initially purchased in 1989 for just £600, pre-auction estimates expect the piece to go for somewhere between £1.2m - £1.8m when it goes under the hammer in February.

The work will form part of a collection from the Young British Artists (YBA) movement, a loose group of visual artists who began to exhibit together in London in 1988. Leading artists from the group, along with Hirst, include Tracey Emin and Jenny Saville.

The Tate describes the YBA as "known for their openness to materials and processes, shock tactics and entrepreneurial attitude."

Hirst was at the forefront of the YBA movement and made his name by transforming everyday objects into shocking pieces that question the very nature of art.

According to Phillips, "Bodies" was purchased by collector Robert Tibbles, a banker who began collecting "at the genesis of a movement that transformed contemporary British art, and ushered a novel artistic language built on rebellion and audacity."

The Robert Tibbles Collection: Young British Artists & More is made up of 30 different works including 6 by Hirst, reportedly the UK's richest living artist.

The collection is expected to fetch £4m in total.

Speaking with CNN, Tibbles recalled the response to his purchase more than 30 years ago: "People completely unrelated to the art market thought it was quite off-piste and uncomfortable. The medicine cabinet has always produced the strongest reaction of all the works in my collection. There's something very primal about having a product which you associate with something personal like your health, put in a public way like that."

Hirst would create a series of 12 medicine cabinets in total, but it is his more ambitious pieces that have garnered worldwide notoriety. Death would always appear as a central theme in his works; his most famous pieces are a series of dead animals preserved in formaldehyde.

"The Physical Impossibility of Death in the Mind of Someone Living", a 14-foot tiger shark preserved in formaldehyde is considered one of the most iconic pieces of British art and a symbol of the Britart movement.

The New York Times gave a chilling review of the piece in 2007.

"In keeping with the piece's title, the shark is simultaneously life and death incarnate in a way you don't quite grasp until you see it, suspended and silent, in its tank. It gives the innately demonic urge to live a demonic, deathlike form".

In September 2008, Hirst made an unprecedented move for a living artist by selling a complete show, Beautiful Inside My Head Forever, at Sotheby's by auction and bypassing his long-standing galleries. The auction raised £111 million, breaking the record for a one-artist auction as well as Hirst's own record with £10.3 million for The Golden Calf, an animal with 18-carat gold horns and hooves, preserved in formaldehyde.

Damien Hirst, The Wellington & His Legacy

Damien Hirst's influence on British art is unprecedented and has no doubt helped to inspire future generations.

Exclusive Knightsbridge members club "The Wellington" was home to an array of Damien Hirst graffiti alongside striking pieces from some of Britain's most talented young artists.

We are delighted to be able to offer some of the eccentric artwork that lined that walls. Explore the unconventional catalogue today with everything from prints and paintings to sculptures and mirrors signed by Will.i.am.

All lots are offered at no reserve so don't miss out on the opportunity to secure head-turning art at fantastic prices. 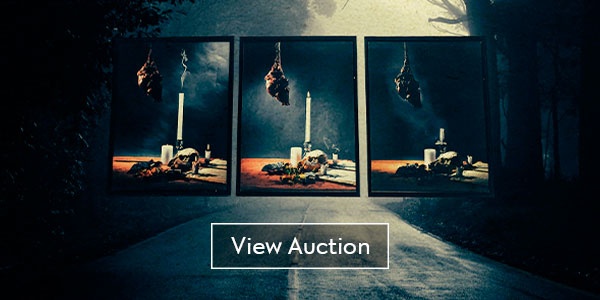