Banksy's sculpture The Drinker has been withdrawn from Sotheby's London auction.

The sculpture was due to be one of the highlights of Sotheby's contemporary art sale with a high estimate of £1m.

It was withdrawn from the auction off the back of allegations that it was stolen. Andy Link, the artist known as Art Kieda, claims that it was taken from his garden.

In a statement, Sotheby’s would only say: “The work has been withdrawn in agreement with the consignor." The auction house said that the decision is not related to Link's claim.

The statue is a comedic homage to Rodin's The Thinker and features a traffic cone on its head. It was initially left in a small square in central London in 2004.

Banksy's first foray into sculpture, it was originally intended for the piece to be moved from venue to venue within London. It was "kidnapped" by a group called AK47 who contacted Banksy to demand a ransom of £5,000 for the piece. 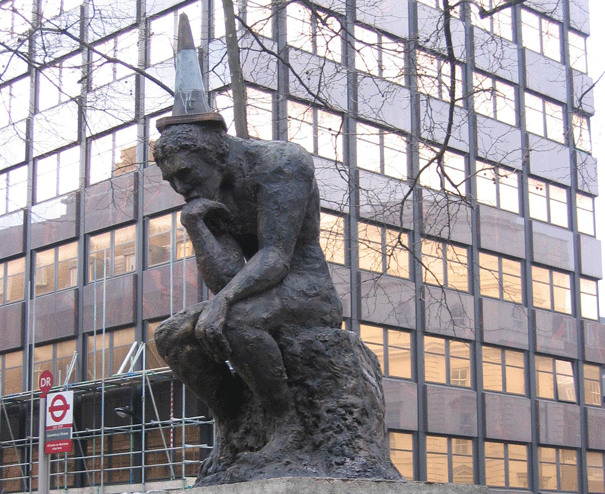 In typical Banksy fashion, he responded with an offer of £2 towards a can of petrol to set it on fire. The offer was rejected and the sculpture took residence in Link's garden.

The current vendor allegedly acquired the work from a dealer in 2014 but Link claims that it was stolen from him while he was away. He is currently still in possession on the traffic cone.

Link stated that his ideal outcome would be to meet the current owner of the statue “and come up with a deal that would reunite the cone with the statue and we get 50% each. I want to give a million quid to a local youth charity in Hackney. If it’s worth £2m I would gladly give half that to a local charity.”

There is certainly a lot of history behind The Drinker and it remains to be seen what will become of it.

Judging by the sums Banksy's work is fetching at auction recently, it is no surprise to see people wanting to cash in on it.